Fun in the Finger Lakes with the #UASAtoms 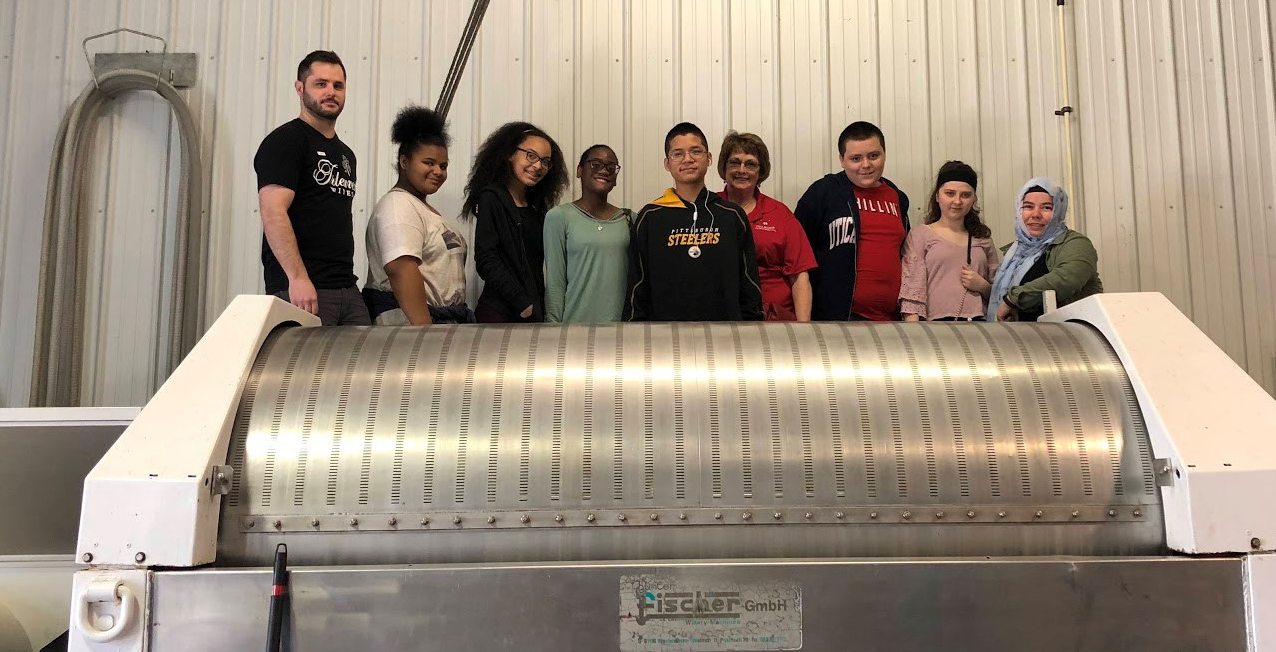 On Saturday, May 5th, 2018 a group of UASCS eighth graders joined math teacher Miss Dundar and Instructional Coach Mrs. Maher for a day-long field trip we called FUN IN THE FINGER LAKES. The goals of our trip were to: explore college and career Opportunities; visit an Anne Frank/Holocaust Memorial, and enjoy a day with friends.
Our goals were met. We left Utica early on Saturday morning and returned by early evening. We visited four interesting places in and around Aurora, New York which is south of Auburn on Cayuga Lake in the Finger Lakes region of upstate New York.
Our first stop was at Wells College located in Aurora, NY. Wells is a small co-ed liberal arts college located on Cayuga Lake. Set in a rural/agricultural area, Wells is seeking to increase diversity in its student population and our scholars got to tour both the academic and residential parts of the college.
From there, the group toured Treleaven Vineyards, where they learned about how grapes are grown and turned into juice, wine and more. Winery owners talked about agriculture and business practices in today’s economy. They gave scholars practical advice about choosing meaningful work and developing positive relationships and showed us their entire facility.
The next agribusiness stop was at Belltown Dairy in Locke, NY where sustainable agriculture is the business focus. Belltown is part of a CAFO ( Concentrated Animal Feeding Operation) where 5,000 cows are milked. In addition to meeting the cows personally and learning about dairy farm operations, the group also viewed the farm’s Methane Digester which converts the cows’ manure to electricity that runs the farm. Other products that are converted from manure include fertilizer and bedding.
In eighth grade Social Studies, scholars learn about World War II and the Holocaust. Important figures of that era like Anne Frank and others are discussed. Our last stop of the day was at Southern Cayuga Central School, where an actual sapling from the Chestnut tree Anne Frank viewed from her attic hideaway, is growing. We heard the story of the Anne Frank Memorial Project across America and felt proud to be part of that remembrance. We met three of the volunteers who care for the tree and enjoyed the stories they told us. Mrs. Maher worked for that school district many years ago.
As stated in the UASCS Mission statement, the school seeks to graduate students who can think critically and creatively, who are committed to a lifetime of learning and civic involvement, and who are conscious of local, global, and environmental issues. It is hoped that field trips like this one help our scholars to maximize their potential and become energized citizens in our global society. Thank you to SANY and our Finger Lakes hosts for supporting this learning opportunity. Go Atoms!
Click Here to See More Photos!